More than 40 Lakhs Students use Grammarly for their spell and grammar checks. You can register and try for free.

In this post, you’ll learn how to Find Roots of Quadratic Equation in C++ programming language.

This lesson, you will learn how to find the Roots of Quadratic Equation, with the comparison operator, equal-to operator, mathematical operations and the decision making statements using the C++ language. Let’s look at the below source code.

How to Find Roots of Quadratic Equation?

The above statements are the main factors that support the function of the source code. Now we can look into the working and layout of the code’s function.

A Quadratic equation is of the form ax2+bx+c = 0 (where a, b and c are coefficients), and to find it’s roots we use the formula given below.

Based on the above conditions we can have created a source code to find the roots of the quadratic equation, by using the comparison operator, equal-to operator, mathematical operations and the decision making statements. 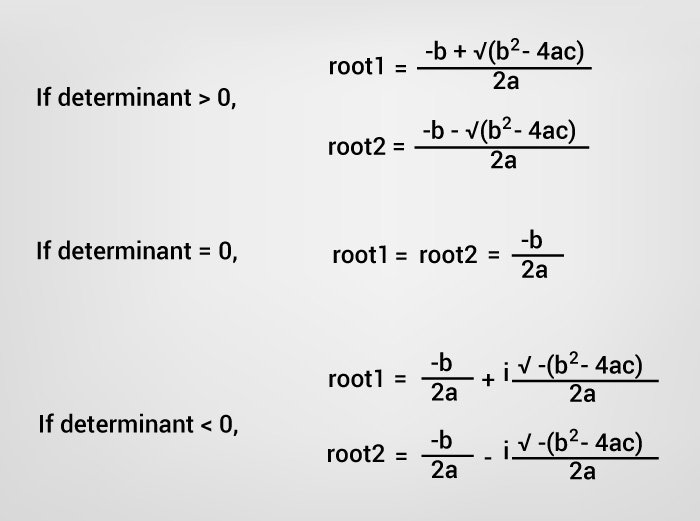 Note: The ‘ << endl ‘ in the code is used to end the current line and move to the next line and ‘\n’ is also a new line function, to understand how both the functions work exclude it from the code, move it around and work with it.

Not a member yet? Register now

Are you a member? Login now